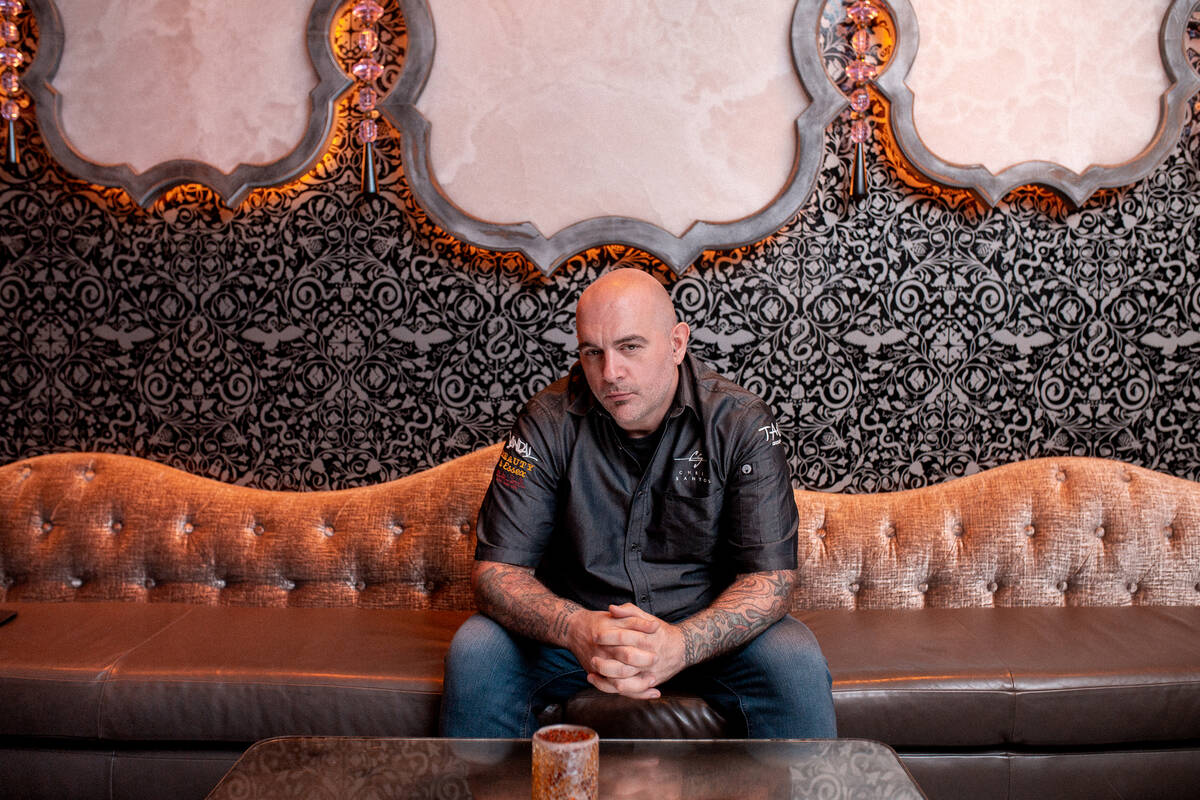 Celebrated chef Chris Santos is opening Stanton Social Prime, a spinoff of his former Stanton Social in New York City, in Caesars Palace on the Las Vegas Strip. The debut is planned for winter 2022. (Caesars Entertainment)

The Lower East Side is coming to the Strip.

A spinoff of Stanton Social, for more than a dozen years a restaurant mainstay on the Lower East Side of Manhattan, is set to open this winter in Caesars Palace as Stanton Social Prime. Celebrated chef Chris Santos, owner of the old Stanton Social, is helming the new concept, a partnership between Caesars Entertainment and Tao Group Hospitality.

The new restaurant will feature signature dishes from the New York Stanton, known for its global shareable plates. (So: Are French onion soup dumplings in our future in Las Vegas?)

“We are thrilled to build on our existing relationship with Caesars Entertainment while delivering another Tao Hospitality Group dining destination from chef Chris Santos to Las Vegas,” said Jason Strauss, co-CEO of Tao Group Hospitality.

Santos opened Stanton Social in 2005; it closed on New Year’s Eve 2o18. In a 2005 review, Frank Bruni of The New York Times recognized the restaurant’s place-your-finger-on-the-spinning-globe menu, praising the “laudable cleverness” and “infectious playfulness” of many dishes.

City of Henderson making things fun during the pandemic!https://cityofhenderson.com/henderson-happenings/program-and-classes/stay-rec-connected?fbclid=IwAR10Aru9ocNJ6igXJ6xftpIY99TYzE2cJ-dEg0NaAzEW1JTTAq6Cw5nAOHA

TO FORBEAR OR NOT TO FORBEAR... THAT IS THE QUESTION! Making your mtg payment during the Covid 19 crisis.

Forbearance will erase what you owe. (Fiction)

The financial piper will come calling at some point. Thus, the CFPB and lenders recommend that those who have the capacity to make payments should make the payments.

Forbearance procedures are specified in the CARES Act.

It is up to the servicer to decide how the borrower will make up for missed payments.

We have reviewed forbearance policies by several servicers who mandate that the entire collection of missed payments is due at the end of the forbearance period. In other words, they are not just tacked onto the back of the loan. If your loan servicer forbears or delays your mortgage payments for 1-6 months, 100% of those payments can be due and payable the minute the 1-6 month forbearance is over- not 27 years from now when your loan is due to be paid off.

As you can imagine, such forbearance does not provide much relief to borrowers who skip 6 months of payments, only to be required to cut a big check for 6 months of payments on day 181 of their forbearance. Some servicers have more attractive forbearance options, which allow a slower repayment of forborne payments. The important thing to note is that the servicer gets to decide - at its sole discretion - the terms of the repayment of the forborne payments. Make sure you know the full and complete terms of your forbearance

Requesting a loan forbearance can many cause other problems for your credit-- undermining your future ability to get a home loan or even refinance your home loan for many years to come.

My advise is always to do what you can to pay your house payment each month if you can. A forbearance is not the end-all and could be a ticking financial time bomb very shortly down the road and affect your ability borrow, purchase, or refinance your home, car, and maintain a good credit score for many years to come.

The City of Henderson's parks and trails remain open for your use. We have closed sports courts, playgrounds and skate parks to help prevent the spread of COVID-19. While enjoying our wide open spaces, we ask that you use common sense and avoid other people. Following these guidelines will stop the spread of the virus and help us all return to life as normal more quickly.#HendersonCares

Google and Raiders come to Henderson!https://www.reviewjournal.com/local/henderson/henderson-landed-raiders-and-google-in-big-year-for-the-city-1579677/

https://homes.reviewjournal.com/news/resale-news/experts-say-feds-preparing-market-rate-increase -Buy your new home in Las Vegas or Henderson before interest rates go up!

Check out all the Henderson and Las Vegas events this week!  If you are looking for Henderson or Las Vegas real estate check us out too: https://www.reviewjournal.com/view/henderson/henderson-area-community-events-calendar-march-17-23-2016

Several residents who are savvy at making soups plan to prepare them in bulk for the upcoming Empty Bowl Benefit Luncheon & Auction.

“I won’t make it until that morning because I want it to be as fresh as possible,” said Brouwers, an 18-year Catholic Worker volunteer.

The luncheon is a collaboration between the Nevada Clay Guild; Mission Hills Pottery, 9480 S. Eastern Ave., Suite 160; Aardvark Clay & Supplies, 6230 Greyhound Ave., Suite E, which donates materials; and Green Valley High School. Brouwers said she has been involved with the event since it was created in 1999 by Donna Potter, a clay guild member and owner of Mission Hills Pottery.

“When it first started, we had just a few bowls that were donated by the Clay Guild and a small silent auction,” Brouwers said. “Over the years, it has just really grown, and those who do come usually like to come back every year.”

“We had a bowl-a-thon in January, where Clay Guild members came to Mission Hills Pottery and made about 200 bowls, and throughout the year, they made them, as well,” Potter said. “It’s (the Empty Bowl) a perfect pairing for people who make art that can help out.”

Empty Bowl attendees pick a bowl and clean it on-site before eating lunch, which also includes bread. Participants can take the bowls home afterward to serve as a reminder of those who lack sufficient food, Occhiogrosso said.

Brouwers said the luncheon is “beautiful in its simplicity — the whole concept of the empty bowl and being hungry and being homeless; I think that’s the beauty of the event.”

Donated bowls, paintings and drawings are scheduled to be up for bid during the auction.

Aside from Brouwers’ tomato basil bisque, soup options are to include chili, chicken noodle, potato kale, corn chowder, lentil, minestrone, and white bean. Toppings and beverages will be available, as well. About six people are making the soups, Occhiogrosso said.

The event costs $15, which includes food and a bowl. Visit lvcw.org or nevadaclayguild.org.

Empty Bowl The benefit and auction is planned from 11:30 a.m. to 2 p.m. March 12 at Green Valley High School, 460 Arroyo Grande Blvd. Tickets are $15, which includes food and a ceramic bowl. Visit lvcw.org or nevadaclayguild.org.

A gas fireplace burning for two days in Henderson caused a blaze that displaced two people and caused about $55,000 in damage Saturday night, according to city officials.

No one was injured, spokeswoman Kathleen Richards said Sunday in a news release.

Henderson Fire Department crews were dispatched to a home near the intersection of West Sunset Road and North Arroyo Grande Parkway about 10 p.m., Richards said. The attic fire to the two-story home was discovered by the home's residents, who were able to exit and call first responders.

The blaze was accidental and due to a gas fireplace burning "for an extended period of time over two days," Richards said. The residents were being assisted by Nevada's chapter of the American Red Cross.

Southern Nevada saw a record 42.3 million visitors in 2015, according to preliminary statistics issued this week by the Las Vegas Convention and Visitors Authority.

Strong convention attendance figures boosted the total, which were reported Tuesday at the organization's monthly board of directors meeting.

Details on 2015's average daily room rate and occupancy rates are expected to be disclosed by the end of the month.

LVCVA President and CEO Rossi Ralenkotter has projected total visitation of 42.5 million people in 2016. In past years, the organization has projected conservatively in its estimates.

Visitation numbers have increased annually since 2013, cracking the 40 million barrier for the first time in 2014.

A big part of the increase was attributed to convention attendance, which was initially listed at 5.9 million in 2015, a 3.9 percent increase from the previous year.

That total was reached despite the city hosting fewer trade shows and conventions than in 2014. It also trailed the record convention attendance mark of 6.3 million in 2006.

Kevin Bagger, the LVCVA's senior director of strategic research, said visitation was extremely strong because local resorts were filling rooms at a more aggressive pace than in 2014 because there were fewer rooms in the city's inventory.

In February and March, there were 150,255 rooms available in Las Vegas. But by May, the total fell to 149,071, due primarily to the closure of the Riviera, which was acquired by the LVCVA as part of its convention center campus makeover.

Once the Riviera is demolished, the 26 acres it occupies will be cleared and converted to outdoor exhibit space. The space is expected to be used for next year's CES show as well as the massive ConExpo-Con/Ag construction equipment show in March 2017.

Occupancy rates have been strong in 2015 with the 11-month average through November 2015 estimated at 88.6 percent overall and 90.6 percent for hotels.

Check out what's new with the weather at https://www.reviewjournal.com/weather/dry-cool-weather-las-vegas-valley-early-the-week